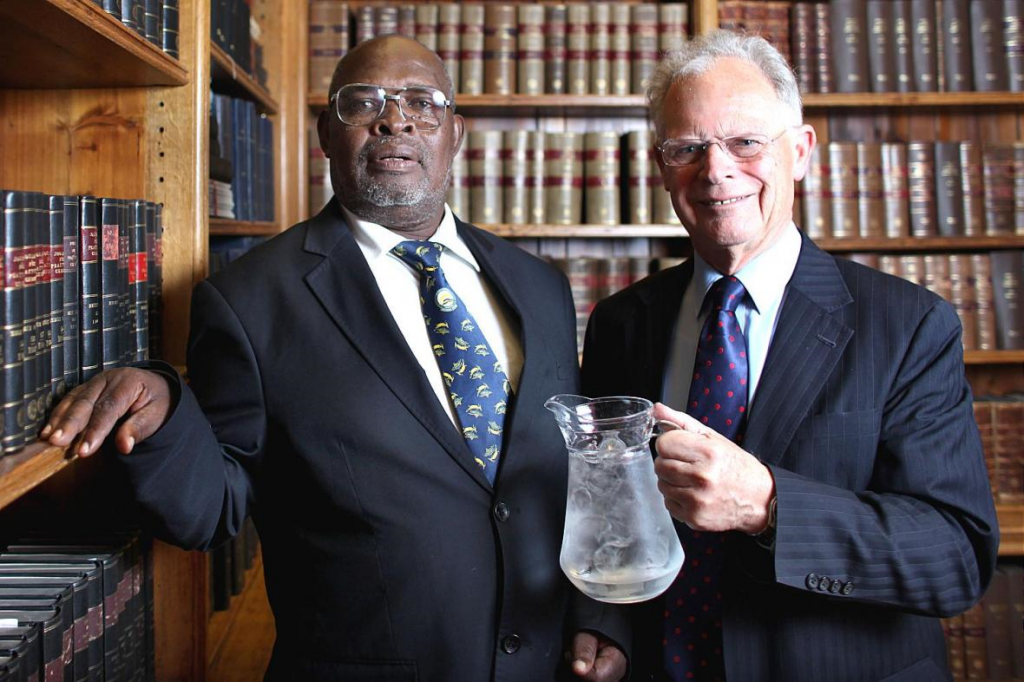 Erasto Mpemba and Professor Denis Osborne at the presentation in London Source:


"My name is Erasto B Mpemba, and I am going to tell you about my discovery, which was due to misusing a refrigerator." It is difficult to imagine that a scientific article could begin with these words. However, it is true. In 1969, the journal Physics Education published a joint publication by Erasto Mpemba and Denis Osborne (1), causing a scientific controversy that has lasted more than 50 years.


This unusual story began in 1963, when a student from Tanzania, Erasto Mpemba, was making ice cream with his classmates during laboratory work. Erasto feared that there might not be enough space in the freezer for his creation, so he set the still hot mixture of milk and sugar to freeze without waiting for it to cool down. To his surprise, after an hour and a half, Mpemba found that his sample had frozen before the other students' pre-cooled portions of milk. Subsequently, this observation was confirmed by ice cream workers, who use this unusual property to speed up the preparation of ice cream, as well as by Mpemba himself, in experiments with water (1). However, common sense would dictate that cold water should freeze faster than hot water. This is evidenced both by Newton's law of cooling and the first law of thermodynamics. Unsurprisingly, his schoolteachers did not take Mpemba's observations seriously. Fortunately for him, however, one day Dennis Osborne, a professor of physics from the University of Dar es Salaam (the capital of Tanzania until 1993), was invited to their school to give a lecture. Although he was also unable to explain Mpemba's observations, he promised to test them in a university laboratory. When similar results were obtained in laboratory conditions, Osborne decided to present them to the public. So, in 1969 the aforementioned article, co-authored by Mpemba and Osborne, was published (1,2).


The phenomenon discovered by Tanzanian schoolboy Erasto Mpemba was given his name. The ‘Mpemba effect’ is the scientific paradox that, under certain conditions, heated water can freeze faster than cold water. In fairness, it should be noted that this effect was first mentioned in the works of Aristotle, and such scientists as Francis Bacon and Rene Descartes have also written about it (2,3). It was Mpemba and Osborne's article, however, that revived interest in the problem, and it started being studied in various fields of science. Over 50 years, a large number of experimental and theoretical studies have been carried out aimed at elucidating the causes and implications of the 'Mpemba effect'.


Among the simplest explanations were, for example, the following: warm containers with water melt the ice of the freezer beneath them, improving thermal contact with its walls, and, therefore, conduct heat more efficiently, hence the rapid freezing. However, this reason is easy to refute, which Osborne did by placing containers of hot and cold water on foam plastic. Another popular explanation is evaporation. Hot water evaporates faster than cold water: its volume becomes smaller, so it solidifies faster. This hypothesis was also refuted - the volume of water changes too little during evaporation (1,2).


Other hypotheses were put forward, but none of the explanations was convincing. This scientific mystery worried scientists so much that in 2012 the Royal Society of Chemistry in the UK even announced a competition with a £1000 prize for anyone who could find an explanation for the Mpemba paradox. There were more than 22,000 entries to the competition! The winner, announced on 10th January 2013, was Nikola Bregović from the University of Zagreb, Croatia (4). Bregović's idea was that the accelerated freezing of warmer water can be caused by several reasons at once – namely supercooling and convection. Under certain conditions, cold water can supercool (be in a liquid state a sub-zero temperature) rather than freeze. Enhanced convection in a warmer sample can also accelerate cooling due to more intense heat radiation. Cold water begins to freeze from above, reducing the cooling rate (5). However, no one has answered the question of what conditions ensure 100% reproduction of the 'Mpemba effect' unequivocally.


In late 2013, a bold statement by scientists from Singapore's Nanyang Technological University led by Chang Sun claiming to have solved the Mpemba paradox and found its molecular mechanisms was published on the international scientific paper pre-print site arXiv.org (6). In 2014, their article was published in the journal Physical Chemistry Chemical Physics (7). The researchers believe that the reason hot water cools faster than cold water is the difference in the energy of hydrogen bonds between the molecules of warm and cold water. When heated, hydrogen bonds between water molecules are stretched, and covalent bonds inside the molecules are compressed; when cooled, this leads to a greater release of energy equivalent to cooling (6,7,8). However, the work of the Singaporean scientists is purely theoretical, and additionally lacks predictive power (3).


The main difficulty in finding an explanation for the 'Mpemba effect' is that it is not always reproduced and significantly depends both on the conditions of the experiment and the formulation of the problem (2, 3). After all, what do we mean by "freezes faster"? Faster cooling to 0°C, the appearance of the first ice crystals or a complete transition from the liquid phase to the solid (complete freezing of water)? By applying various parameters or formulations, one can obtain completely different results (2, 3). It is therefore not surprising that some scientists argue the 'Mpemba effect' exists, while others deny it, calling it an experimental artifact (3). Both sides can find experimental confirmation (2, 3). In 2016, the online mega journal Scientific Reports (run by Nature Publishing Group) published an article in which the authors – Henry Burridge and Paul Linden from the University of Cambridge – carefully analyse the data of other researchers and conduct their own experiments, coming to a conclusion that is both bold and disappointing: “We conclude, somewhat sadly, that there is no evidence to support meaningful observations of the Mpemba effect”. Here it should be noted, however, that the authors, pointing out that there is no clear definition of the effect in published works, define "faster cooling" to mean the time taken to cool water to 0°C, without considering further interphase transition (from liquid to ice). The British scientists failed to confirm the ‘Mpemba effect’ by this definition. In addition, they compared the observations of other researchers mathematically and showed that the effects demonstrated are often insignificant and strongly influenced by experimental conditions. Thus, the 'Mpemba effect' can be 'observed' thanks to a 10% inaccuracy in measuring the height to which the thermometer is lowered. The marked differences in the freezing time of warm and cold water obtained by Mpemba and Osborne have yet to be replicated (3).


Nevertheless, many scientists are in no hurry to deny the 'Mpemba effect' the right to exist. In 2017, several works were published which investigated its possible causes both theoretically and experimentally. A group of scientists from China and the USA proposed a new explanation of the 'Mpemba effect', again based on the properties of hydrogen bonds between water molecules (9). Using vibration spectroscopy and computer simulations, they showed that when heated, weak hydrogen bonds between water molecules are destroyed, and the number of strong ones increases. This leads to the appearance of small, strongly bound clusters in the water. This structure facilitates the formation of ice crystals. Therefore, warm water freezes faster than cold water, requiring additional time and energy to organise randomly located clusters (9).


In the same year, theoretical models were proposed that prove both direct and inverse (when colder water can be heated faster) 'Mpemba effects' (10, 11). The first theoretical model was formulated by the American physicists Zhiyue Lu and Oren Raz (10). This model, based on Markov statistical mechanics, offers a general criterion for predicting the appearance of a direct or inverse ‘Mpemba effect’ in a system which deviates from thermodynamic equilibrium. A group of Spanish scientists led by Andrés Santos used a different approach, presenting water as interacting inelastic balls (like sand) (11, 12). Using this model, they determined the initial conditions for the 'Mpemba effect': they could predict how and when the direct or inverse effect could be realised. According to their calculations, the 'Mpemba effect' can occur if the balls have very different kinetic energies (a large kinetic energy spread), a hidden property that is influenced by the way the sample is processed before the experiment. For example, a glass of water may be unevenly heated or cooled, and this will give more energy to some molecules than others (11-13). Of course, such a model is far from reality, and observations of a liquid ‘made of granules’ still cannot explain the effect in water (13).


However, theoretical and model approaches continue to be widely used in studying the Mpemba paradox. For example, Oren Raz, in collaboration with other researchers, developed an initial model which was a simplified case of a few-body system (10). In an article published in 2019 in the journal Physical Review X, scientists presented a new model that already works for simple thermodynamic systems (14). With the help of this model, a 'strong Mpemba effect' was revealed, in which the cooling of a system heated to certain temperatures can be significantly accelerated (14). Lastly, the 'inverse Mpemba effect' was recorded in a very recent paper by Oren Raz and Amit Gal, published in February 2020 in Physical Review Letters. They also determined the parameters at which heating can occur faster after pre-cooling (15).


The ‘Mpemba effect’ is not only being investigated in water. It has recently been found in other liquids, magnetic alloys, and granular gases (rarefied systems consisting of particles larger than molecules such as interstellar dust or aerosols in the Earth's atmosphere) (10-16). This raises the question of the need to develop a general theory to explain this 'non-classical' behaviour of systems.


We see that with such a seemingly simple phenomenon as the freezing of water, everything turns out to be not so simple. The answer to the 'Mpemba riddle' apparently depends on the question being asked. Does hot water always freeze faster than cold water? We can say with almost complete certainty that it does not. Are there conditions under which hot water freezes faster than cold water? There probably are, but so far scientists still do not know what these conditions are, which means that they cannot find a clear explanation for this phenomenon.


5. Bregović, N. (2013). Mpemba effect from a viewpoint of an experimental physical chemist


13. Looking to the past might explain why hot water can freeze faster than cold https://www.chemistryworld.com/news/looking-to-the-past-offers-an-explanation-for-mpemba-effect/3008...